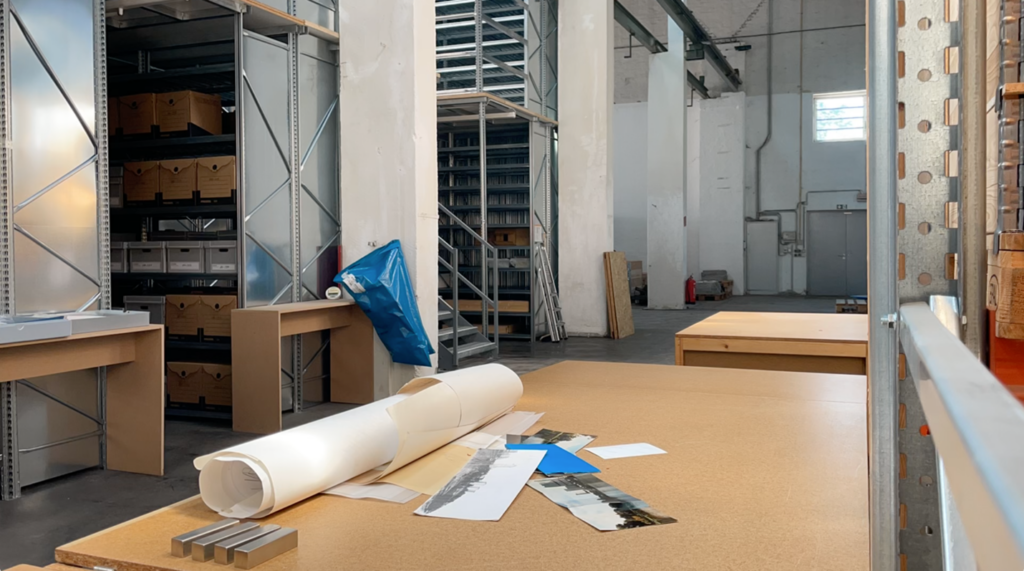 How can you touch the digital? Does it smell? Can architectural research trace the action and thinking process of both architects and archivists to uncover memories and thus knowledge about linked events? Assuming that material serves as a situation rather than an object – how might these situations be embodied? Or rather, can the archive actually embody knowledge? Over the past few weeks, I’ve been delving into the world of archives, or rather archiving. The interesting thing to me about the practice of archiving is that the author of the collected material starts with his/her particular practice of collecting and the archivist will then continue – very often without ever having been in contact with the author. There is trust in these archival materials that I have tried to reflect on the process of encountering the physical material and transferring it to the digital world, the database of the Architekturzentrum Wien (AzW). In a world that relies on the digital, trust in knowledge continues to be held in a material object, an electronic device. When the pandemic hit us, we were all surprised at how quickly we adapted to new forms of habits in our lives. We can do more than we thought we could. How can the bodies of people engaged with the archival material still be visible in the future? Perhaps by making the knowledge transparent and thus accessible? The archivist carries knowledge that will never make it into the database. On the one hand it’s tacit, on the other hand it has a clear relation to the process of archiving. During my time at the Az W, one of the things I had to do was to unpack old plans by Austrian architect Hans Hollein and inventory them. After a few plans, I got a sense for the style of the drawings and the methods used. I also sorted the paper by either size or property so that I could more easily put the plans back in the right box. Not only is this process functional, but to some extent I tapped back into the architects’ embodiment. Investing in a detailed drawing or an elaborate collage gave insight into the amount of information the file contains. Much like the time invested in a digital file, it is difficult to comprehend until the viewer has never created, thus experienced, such a file him-/herself. He or she could only guess at it, but never feel it. There are equivalences in the digital and embodied blind spots to be uncovered. It is literally about flattening of the dimension and who’s eye is looking at the plans. The material aspect is much more democratic. One would need a certain level of training to be able to read the plans fluently. The weakness and strength are one and the same intersection. Unlike the digital archive, the physical archive is not sorted by project, but by type of support (drawing, model, photograph, etc). Not only the different treatment of the physical material, but also my motion sequences depended on the type. I unrolled plans and some of them were very fragile, not in relation to the material chosen, but to the technique used to make the drawing or collage. This sensitivity immediately reveals a certain attachment to the material. The memories and labour that went into it became clear to me through this sensory experience of touch that I remember how carefully I carried finished drawings into my study for final reviews, or when we printed competition plans and packed them extremely carefully into a box that would carry our vision to the committee. Since those memories had resurfaced, I also had a much easier time remembering where the archival material was kept and what it contained. According to Ahmed, “emotions are not “in” either the individual or the social, but produce the very surfaces and boundaries”.[1] The focus is on how emotions can be generated with and through art and architecture. I wonder if someone else who never had the experience of practicing architecture would feel the same way. In any case, the material helps build a relationship. These sense memories are also connected to the material properties. As I unrolled, flipped through, and rolled up the plans, I found that my attention was much more focused on the drawing when one of the papers stood out. This made me aware of noticing the material but not the drawing itself at first glance, which seems contradictory. How could such emotions and memories in the archive be captured? And how can they be revealed when a scholar is researching a particular case? How can we remember and trigger emotions visually if we can’t touch them? These are questions that I take away from the archival secondment to address in my dissertation, which argues that material helps to literally bring emotions to the surface of the human body, which could provide new insights into the way we think surfaces and thus archives in the past, present, and future. Report written by Mara Trübenbach

Secondment in the Archive of Christian Kieckens 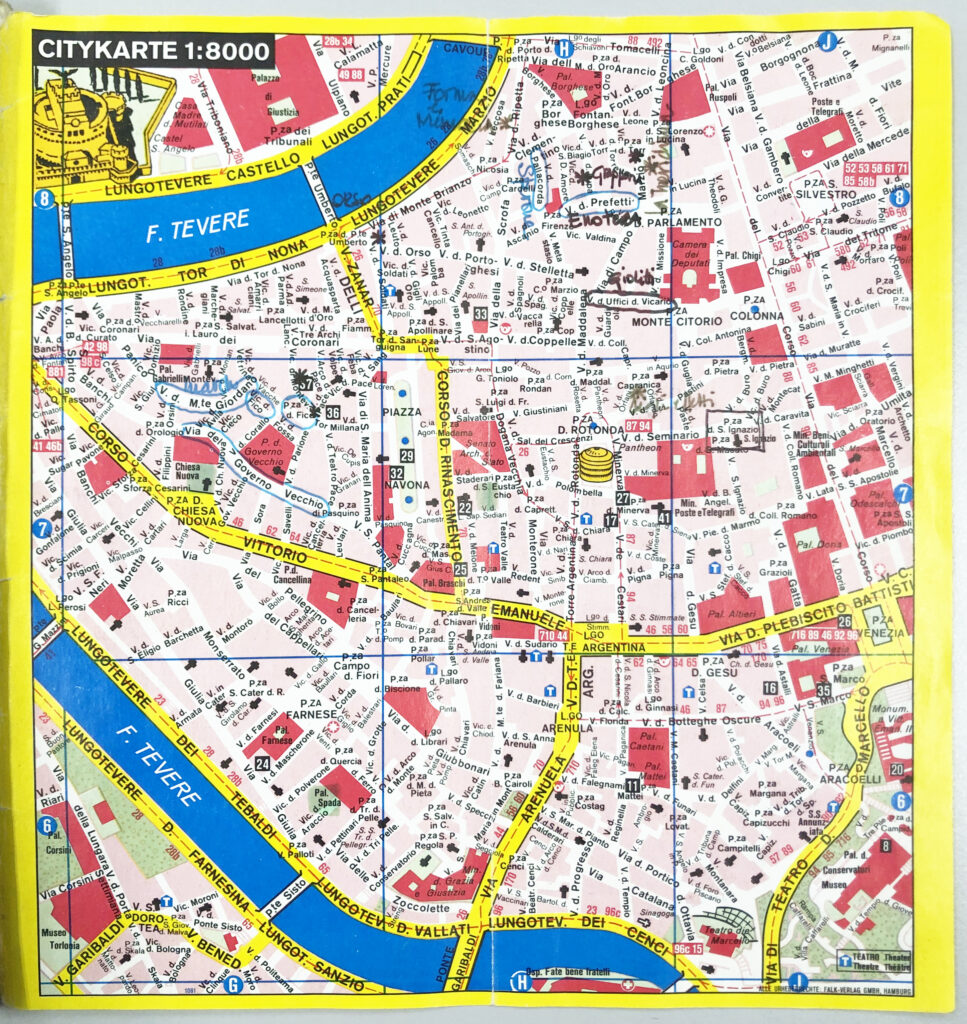 The archive of Christian Kieckens in which I have spent the last few months of research is an extremely rich, varied and rather unconventional collection of materials. In addition to the materials relating to Kieckens’ professional and academic activities, the archive contains a large amount of documents that are normally considered secondary and therefore often not archived: postcards, invitations to exhibitions and various travel documents, including travel guides, visit programmes, local contact lists, annotated maps and even restaurant and hotel receipts. These materials concern the annual trips with his students but also the many ones with the colleagues and friends who rotated around the Stichting Architectuurmuseum S/AM and, later, around the institution of the Bouwmeester. The importance of this documentation is related to the crucial role that travel played in Kieckens’ activity but also, more generally, in the construction of Flemish disciplinary culture since the 1980s. In particular, these resources were crucial in identifying the networks of people with whom Kieckens was in contact but also the architectures and references he was interested in. 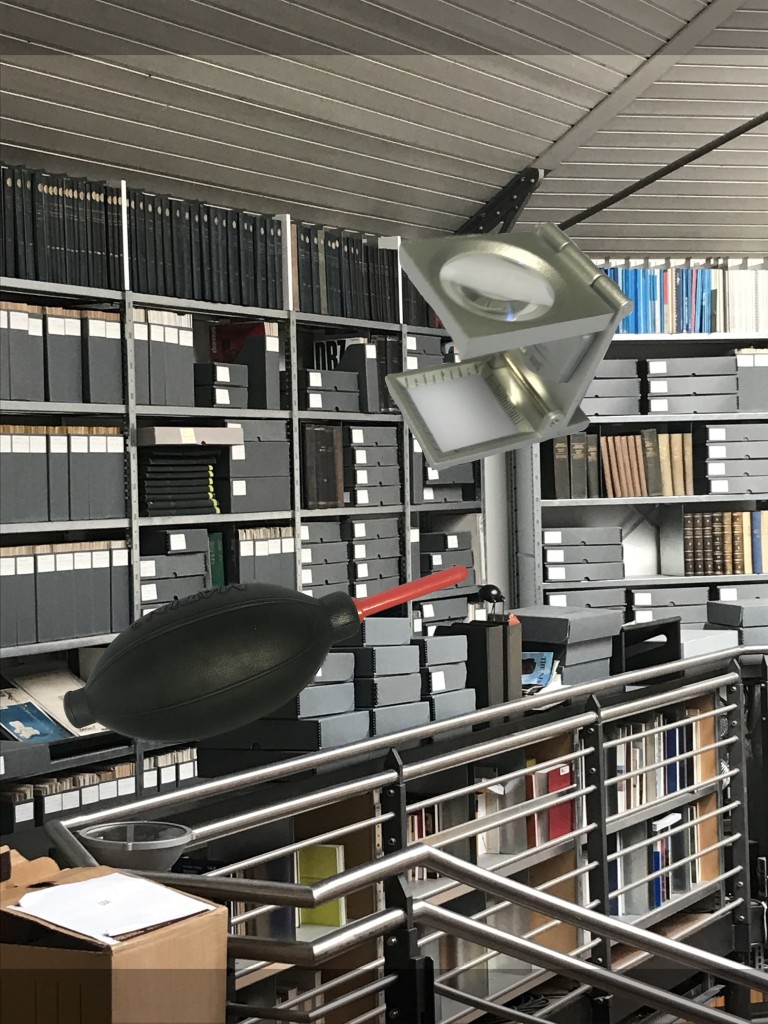 I am sitting in a room upstairs behind the galleries and library. On the light box in front of me on the table is a sheet of Dias photos from the 1980s. The film sits in small square plastic cases and the cases are organized in a plastic folder with a small pouch for each image. There are a few notes written on the cases and the folder, a year, a location, a name, some followed by a (?). They are dusty. The plastic folders are dusty. Maybe I am the first to open them in many years. Without destroying the brittle folder, I gently lift out a photo and place it on the lightbox. I take a small silver magnifying glass, place it on the photo and look. On top sits the dust, small pieces, large pieces. Is that a hair? Below are layers of chemical changes. A light-coloured corner (sun damage?), a dark brown spot in the middle (moisture?), and a thick layer of black correction pen on the edge (on purpose?). At the bottom, is the photo itself, a snap-shot of a sunny day in 1984. I move the magnifying glass to one side and pick up a small black rubber ‘balloon’ with a red spout in the front, a dust blower. While holding the image frame in place on the lightbox with my left hand I press on the dust blower with my right, directing the stream of air onto the surface of the photo. The particles move and settle elsewhere. I repeat the movements until I can no longer see any dust, checking in the magnifying glass again and again. I carefully lift the photo to the surface of the scanner next to me and close the lid. On the computer on the desk, I make a name for the future digital copy of the image: a series of numbers and letters referring to places, people, typographies, years, archive boxes, plastic folders, places in plastic folders, notes, scribbles, ?s. I press scan, and the photo appears on the screen and is saved and filed in a folder within folders in the digital archive. I open the scanner, lift the photo and insert it into a new plastic folder in a new pouch. I am careful not to touch the photo or make it dusty, but maybe a little bit of dust from my hands ends up in the pouch as well. The folder is added to another folder within a box, within a collection, on a shelf in the physical archive.