On Friday 1 and Saturday 2 July 2022, the second part of the Antwerp Foundational Meeting was hosted at the University of Antwerp in Belgium. A few months ago, from 7 to 9 February, the first part of this meeting had been held online, aiming to assist the Early Stage Researchers in completing an extensive paper that will eventually form part of the final thesis. The second part, now held in person in the city of Antwerp, focused on consulting around the next steps of the Network while encouraging the informal exchange that only face-to-face meetings can offer. At the same time, it sought to introduce the TACK network to the Design Sciences Faculty of the University of Antwerp, to the city and its urban culture. 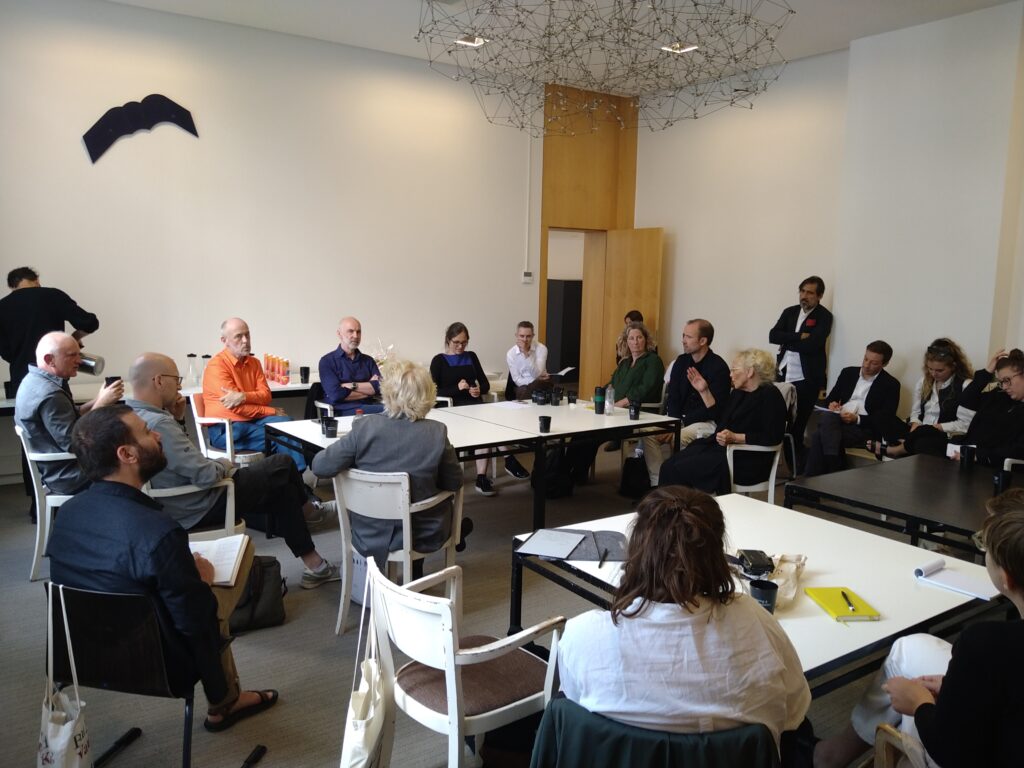 After a short introduction by Professor Lara Schrijver the proceedings of the first day started with a presentation by Helen Thomas on the website and digital publication of the TACK network. Thereafter, professors and PhD researchers were jointly distributed into three working groups to share ideas around the purpose and objectives of this digital platform, the organization of the material and its navigation. The findings from these sessions were discussed by all attendees and then collated to feed into further development of the platform in the coming months. After lunch, the network members participated in a preliminary discussion with four professors of the department of Design Sciences, discussing its evolution through the Antwerp Academie and the educational principles of its architecture program today; based on a close relationship with the city and a strong focus on professional practice. Dean Inge Bertels welcomed us in the faculty auditorium where we attended to the presentations of architects and professors Geert Driesen, Dirk Janssen, Jan Meersman, Kris Mys. These were followed by questions from the PhD researchers, which mainly revolved around how this particular community perceives Tacit Knowledge in architecture practice and pedagogy.

On Saturday 2 July the meeting was hosted at the university’s main campus. The morning was devoted to an assessment of the secondments to the network’s non-academic partners. Through three parallel sessions the advisory board, secondment partners and ESRs shared observations, insights and challenges that emerged through the experience of the secondments and their connection to PhD research. In particular, we addressed the conditions of the secondment (and whether it is carried out over a shorter or longer term), the delineation of the secondee’s tasks, as well as the benefits for non-academic partners. This highlighted the importance of a thorough preparation of these cross-sectoral partnerships where factors such as the above can be discussed in due time, but also the need of adjustments along the way, based on the specific course of each secondment. Overall, the great potential inherent in the exchange between offices, cultural institutions and academia was noted.

An in-depth dialogue followed on the next steps of the Network, in particular regarding the final conference and the exhibition in 2023. Professor Tom Avermaete presented the proposal of the ETH-Zurich coordination team, thus prompting a constructive discussion. Important elements that emerged were the decision to pursue a dynamic opening to researchers outside the TACK Network through a Call for Papers, but also to communities of practice through a Call for Objects. The latter would allow the exhibition to reach out to a wide audience, but also enable an expanded ownership of the event, by practices invited to contribute with an item that communicates their ideas around tacit knowledge in architecture. The second day concluded with a round of presentations on the prospects for ESRs after the completion of the thesis. PhD researchers had the opportunity to hear three different accounts of ‘life after PhD’ and to engage in lively discussions about the different paths of teaching, post-doc and practice.

Finally, Sunday 3 July was an equally busy day for those who remained in the city, with two excursions and plenty of informal exchanges. The visit to the Handelsbeurs building was led by the supervisor of the restoration project, offering the opportunity for a wide range of questions about the past and present of this historic complex, that developed around the world’s first purpose-built commodity exchange, as early as the 16th century. Similarly, during our afternoon visit to the Vlaams Architectuurinstituut, we had the opportunity to meet its director Sophie De Caigny, who guided us through the exhibitions ‘Critical Care for a Broken Planet’ (travelling exhibition, AzW) and ‘Care for Space for Care. Scenes from Flanders and Brussels’.

Altogether, these three days in Antwerp most fruitfully complemented the work of the online meeting in February, while providing a rich field for dialogue, collective thinking and teamwork: from explorations around digital publications to reflections on secondments and to the next steps for the Network as it enters the final stretch of its three-year journey.