Towards a DIGITAL PUBLISHING PLATFORM for TACK

After three years the TACK project is slowly drawing to a close. During these three years the team sought to understand tacit knowledge in architecture, trying to explicate the implicit. A diverse range of methodologies and approaches led to a large variety of outcomes: exhibitions, articles, objects, recording of talks, images, drawings, videos, and reports. All these different forms of knowledge are of great importance, when it comes to grasp the understanding of the tacit. Therefore, the TACK network sought for a way to collectively show its findings, coherently combine the different media to a comprehensible whole, in some sort of Archive.

Early in 2022 Helen Thomas joined the team to help formulate a design brief. During intense discussions and workshops, it became clear that to represent the TACK project to its full extend, a digital Publishing Platform was needed that allowed for a range of representations of the research, pedagogic and intellectual processes that have been developed. This non-linear and digital form of presenting and publishing the content produced through the TACK project responds to the complex nature of the network and variety of approaches to and methodologies arising from pursuit of the concept of Tacit Knowledge. Therefore, the notion of an “Album” was developed, which allows those who visit the TACK Archive to create their own compilation of elements. The notion of the Album as a selection from a collection of pre-defined content elements has a precedent in the earliest days of mechanical printing, when a customer would take the separate elements of their desired codex to be bound by a bookbinder, a practice which continues today in the binding of collections of journals. An echo of first principles is evident in this revisiting of the possibilities of definition and dissemination of knowledge, not as singular but as multi-layered, sometimes repetitive, and even possibly contradictory.

To organise the multiplicity of outcomes, a taxonomy was proposed that will be continuously refined through discussions within the network and as the archive grows.

To realise this ambitious design brief, TACK partnered with the Scottish graphic and interaction design studio “Rectangle”, founded by Lizzie Malcolm and Daniel Powers. The decision was made to include the TACK Archive into the existing TACK website.

In August 2022 Rectangle began to translate the 27-page long design brief by Helen Thomas into the visual TACK Archive. The transformation process from one medium (design brief) into another (website) is interesting in itself. The collage shown below, for instance, is a working file that led to the design of the platform. This file offers a rare insight into the designer’s mind and process. In this collage the informational structure is mapped out in the two columns with lists of words, showing the interconnection between information. In addition, some of the first digital sketches can be seen, that transform the database into visuals in order to organise and display large amounts of data. The sketches and “atmospheric” inputs are juxtaposed with works from other artists or previous projects Rectangle has worked on (e.g. “1000 things”, see: http://1000things.org/en/info) that serve as inspiration and guidance to design an archive for a vast amount of information. 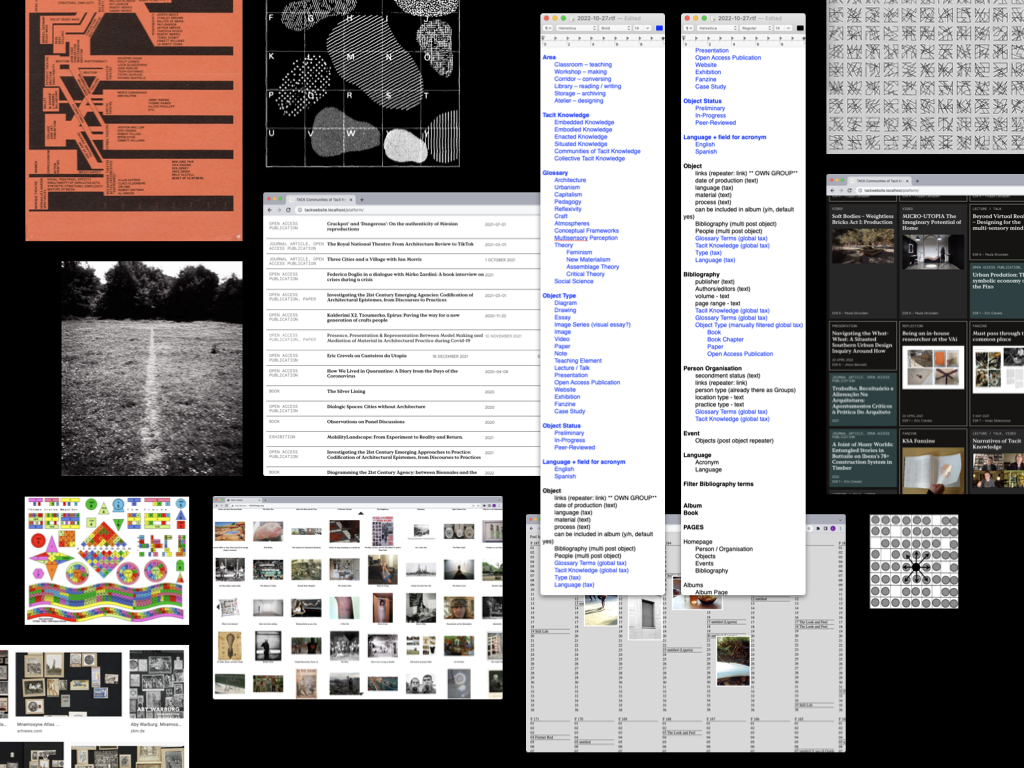 As soon as the first design was finished, Helen Thomas, together with the TACK Coordination team and Lizzie Malcolm organised a feedback session on a digital sketch board. It gave TACK ESRs the opportunity to provide feedback to the digital archive in a very early stage, which proved to be extremely fruitful. In the next months we will continue to develop and implement new features, improving taxonomies and polishing the intuitive and visually appealing landing page.